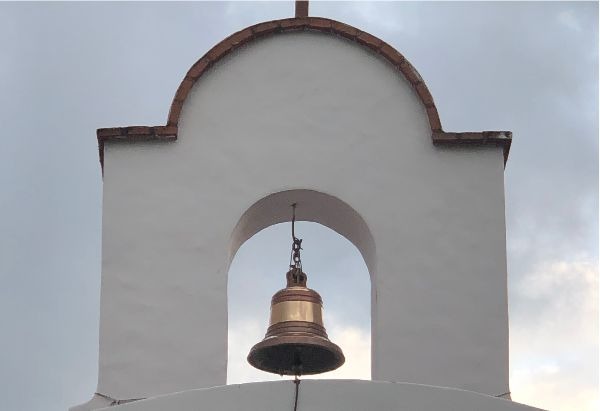 Paulinus of Nola was the first to ring a bell in a Christian Church in 400 AD. It took another 204 years before Pope Sabinian blessed the use of bells on the Universal Catholic Church. It only took another 1,414 years after Pope Sabina blessed the bell for local residents of the community Michael Enright and Jane Bloem to notice that the sound created by the bell on the Iglesia Cuasiparroquia de Nuestra Señora de Guadalupe Sayulita was a dull thud, rather than the brassy note that should be ringing. Michael Enright, a long-time resident of Sayulita for fifteen years and an owner at Villa Amor, and Jane Bloem, who lives in Higuera Blanca and has had a business in Sayulita since 2011, decided something needed to be done to get a new bell for Sayulita’s church.

Michael and Jane wanted the ring of Sayulita’s church bell to be as true as the warm and welcoming spirit of the people in our pueblo. Thus, after contacting Señora Reyna Garcia from the church’s leadership and getting the permission to proceed, Jane’s research located a man named Augustine Grez, a bell maker from Hildalgo, who promised to forge a new bell for the community. Augustine would deliver and install the bell for a fixed price, which was important since Jane knew the bell would be extremely heavy, thinking “the sucker will weigh 70 kilos!” Michael was able to underwrite the cost of the bell with the help of various Sayulita donors, and with help from friends in the mountain town of Jackson Hole, Wyoming. Many of the donations came from parishioners at “Our lady of the Mountains” Catholic Church in Jackson Hole, Michael’s original hometown. Ultimately, Augustine the bell maker remained true to his promise to Michael and Jane, and the new bell was installed last July of 2017.

Now, many people in the community feel that the new bell provides all who hear it with the sound of peace, community, faith, and most importantly, of hope. Residents of Sayulita and holiday visitors will be blessed with the daily tolling of the new bell during the ten day celebration of the Feast of Our Lady of Guadalupe, which began December 2nd, 2018.

Michael and Jane’s hope is that the brassy ring of Sayulita’s new church bell will lift the spirits of all who can hear it– both today and for future generations.