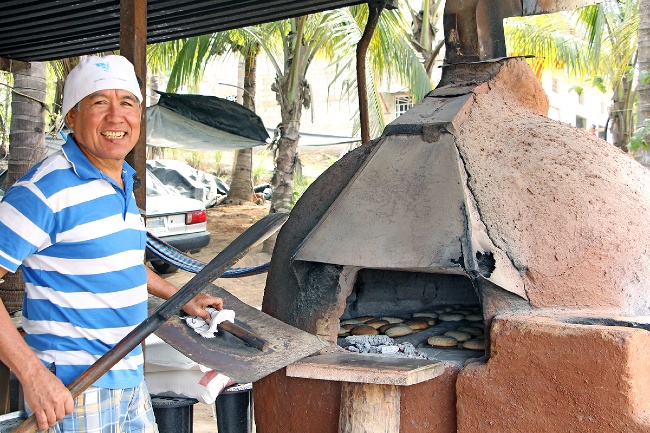 A few weeks ago my husband and I set out for Puerto Vallarta in the early morning hours. As we drove through the neighboring town of San Ignacio I noticed hand lettered signs along the highway for a local bakery, “El Columpio”. The name piqued my curiosity, El Columpio – The Swing. Soon my mind had drifted to other thoughts as I watched the first motions of a small town waking up. Workers boarded a bus, children held their mother’s hands as they walked towards the small grocery store, and dogs milled about as if they too had a scheduled routine to maintain.

Just as we reached the southern limit of San Ignacio the orange glow emanating from within the large dome of a rustic, wood-fired oven caught my eye. There it was… the bakery, “El Columpio”. As we drove by I saw the baker pull a large tray from deep within the oven and I immediately knew I was going to have to return to learn more about the baked goods being created in this “if you blink you’ll miss it” open air bakery.

Yesterday I found myself with some unexpected free time, this was all the excuse needed to make the short jaunt back to the bakery where I had the pleasure of meeting Señor Eligio. Rising in the predawn hours each morning, Eligio, his wife, and daughter work in unison to prepare and bake a tremendous array of sweet breads, many kinds of empanadas, and Mexican sandwich rolls. Eligio graciously offered a glimpse inside the brick oven; the cavernous interior easily had room for 5 large baking trays. As I watched the process unfold before me I realized what an art it is to simultaneously bake so many different items in an oven where your temperature control relies on the experience you’ve gleaned from years of following a time honored tradition.

One of the sandwich rolls Eligio prepared is the iconic telera. Sturdier than most sandwich rolls, telera are used for a wide array of classic Mexican tortas (sandwiches) or for sopping up that last bit of sauce from your plate. In our house we enjoy homemade telera for making Pambazos or with Veracruz style shrimp but they’re equally good served in lieu of baguette with your favorite pasta dish or for big, juicy burgers. Today I would like to share with you my recipe for telera.

Combine the warm water with 2 tablespoons of flour, the sugar, and yeast, stir to dissolve the yeast then allow it to rest for 10 minutes. If the yeast is active a thick layer of foam will form on the surface of the water.
Place 2 cups of the flour and the salt in a large mixing bowl, stir to combine. Create a well in the center of the flour, add the liquid and mix with a fork to form a thick batter. Add the oil and combine. Slowly begin mixing in the remaining 2 cups of flour, adding a small amount at a time until you have a shaggy dough that comes together and no longer clings to the sides of the bowl.
Turn the dough out onto a lightly floured surface and knead for 15 minutes or more, adding the remaining flour one tablespoon at a time as needed. Avoid the temptation to add more flour than is needed; as you continue to work the dough it will become less sticky.
The First Rise - When the dough is smooth and elastic place it in a greased or oiled bowl, turning the dough so that some of the oil coats the top surface of the dough. Cover the bowl with plastic wrap and place in a warm, draft free location to rise until doubled, approximately 1 ½ hours. When doubled, punch the dough down, fold the sides in towards the center and turn the dough out onto a clean work surface.
Forming The Rolls - Cut the dough into six equal portions of approximately 5 to 5 ½ ounces each. Form each portion into a smooth ball by stretching and tucking the perimeter of each ball underneath. Space the rolls evenly into two rows of three on a parchment lined baking sheet. Flatten each patty with just a few passes of a rolling pin, rolling in one direction only, to make an elongated patty approximately ¾ inch thick. To give the Telera their iconic 3 section form, press each roll with the clean barrel of a ball point pen or other similarly sized item to divide each roll into 3 equal sections. The pen barrel should nearly touch the surface of the baking sheet without cutting all the way through. Repeat until all six rolls have been divided into three sections.
The Second Rise - Cover the rolls loosely with plastic wrap and allow them to rise until nearly doubled, usually 45 minutes. The rolls will raise more during baking.
Baking - Preheat the oven to 400 ℉. When the oven is hot, remove the plastic wrap and bake for 18 minutes on the center rack. Immediately transfer the baked telera to a wire rack until cool.

In the next issue of El Sayulero: Aunt Terri Cooks Pambazos.