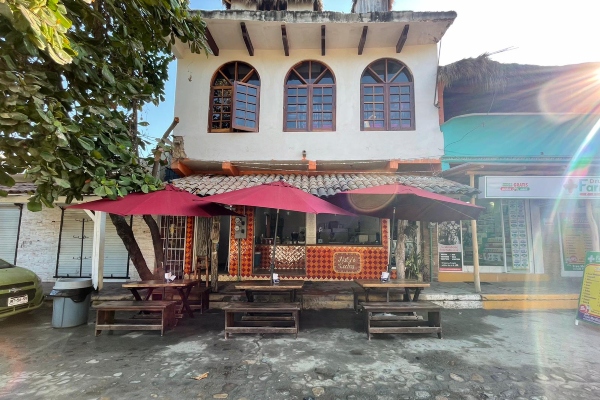 Naty's Cocina, also known locally as Naty’s Tacos, has become an iconic point of reference when visiting Sayulita; it’s a must try when here in town! A simple and very affordable menu, along with a variety of flavors and vegetarian options, makes Naty’s Cocina a favorite choice for easy and tasty street tacos here in Sayulita. The chicken mole, rajas con elote (poblano peppers with corn), and potato tacos are some of the most well known and favorite menu options Naty’s has to offer. In Sayulita, Naty’s Cocina is as commonly known as the main beach and the plaza. If you know, you know, and if you don’t, you’ll soon want to!

Ma Natividad, known by most as “Naty”, was born and raised in the heart of Sayulita. Naty started her cooking venture back in 2010 by selling her home cooked food at a small table outside of her house; she would take out a maximum of eight “guisos” or side dishes, and set them out to sell. These quickly became a hit, and everyone wanted to order from her. From here she expanded to create what is now famously known as Naty’s Cocina.

The idea of Naty's Cocina came from her own family recipes. Naty’s food is a mixture of traditional Mexican with a dash of personal and original family recipes, all served in the classic taco. Now, Naty’s Cocina is a huge success in Sayulita. Located on Calle Marlin, Naty’s is a small restaurant with just three tables set out on the street. With a simple menu with both meat and vegetarian options, and very fair / affordable prices, Naty’s is the preferred choice of locals and tourists alike for those who crave quick, easy, and delicious authentic tacos for a great value.

Stop by Naty’s Cocina to taco ‘bout it for yourself, or visit their Sayulita Life web page for more information.