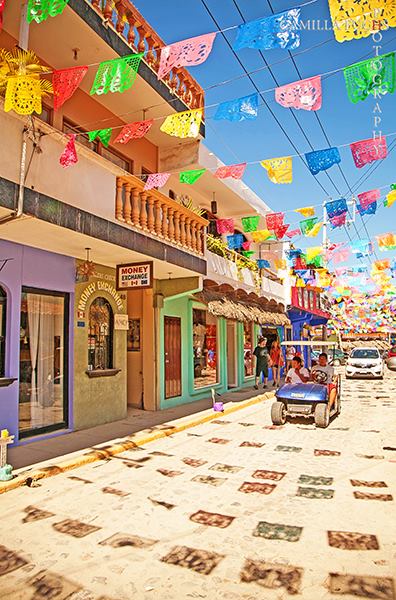 I was fortunate to vacation in Sayulita in February of this year, a destination with an interesting mix of real Mexican culture represented by local handicrafts, while also catering to foreigners taste in food and drink. However, for me, what characterizes Sayulita in particular, is its distinctive mix of sounds.

On waking and falling asleep, the persistent background is the roll of ocean surf. The waves hit like a large pot of water dumped in the sink, which splashes as it dies away. Sometimes the surf is calm and subtle, other times violent and urgent. But, it is always relaxing. At this time of year, there are no high winds, but always a varying light breeze. At just the right speed, you can hear the palm leaves rattling together, like the sound of shuffling cards.

The main beach is usually quite crowded mid-day. As you are right by the water, the surf sound can be quite loud, and you have to talk loudly to be heard. Adults seem to face the surf quietly, but when young kids are around, their screams of delight can easily be heard over the ocean’s din. You may have several neighbors sunning close by and their approximate home base can readily be guessed. You may not discern the words, but the rhythm gives their origin away. The drone of Canadian/American accents is most common. Rapid fire Spanish is frequently heard. The lilt of Italian, guttural notes of German, and the expressive pulse of French Canadian can also be detected.

Particularly in the morning, there is a frequent chorus of birds whose sound is a loud grating static of four or five “dots” repeated several times. The sound is a bit like a sea gull call, but much more rasping. There is also the chirping of numerous small birds, as one would expect of a heavily treed environment. Well before dawn, roosters commence their greeting exchange, which is definitely a cock-a-doodle! Frequently a sally by one rooster seems to elicit a call from another, which may be echoed several times. From time to time throughout the day, a lone rooster will remind you he has not gone to sleep.

Construction is accompanied by trucks revving and gearing, as well as the beep emitted on backing up. There is the sound of the bricklayer’s trowel, leveling their work. Each construction crew in Mexico involves many workers and their patter of rapid Spanish punctuates their labors as they manhandle bricks, sand, cement, and water. Mechanization is unheard of. You can also hear the grating 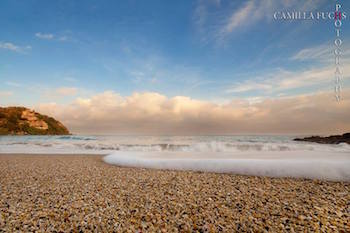 sound of a shovel mixing nascent concrete on the hard pavement. Here, everything is made of concrete with iron bar reinforcing where needed. The sound of hammer and nail is almost completely absent because wood would be dinner for termites.

The favored mode of Mexican transport is the pick-up truck. As it approaches and before you see it clearly, you often can hear it rattle, gears going up or down noisily, or Mexican music blaring loudly on the radio. A louder motor sound comes from a passing ATV, and there is a quiet burr from the electric motor of the many golf carts in Sayulita service.

Perhaps TV and the cell phone are important means of communication, but traditional “pre-modern” methods are still in use. Cars or small trucks equipped with loud speakers advertise their wares. This may be tortillas, fresh farm vegetables, fresh fish, or an offer to pick up scrap metal. Of course, the quality of the sound is similar to public announcements made 50 years ago by loudspeaker. Broadcast in rapid Spanish makes the message even less comprehensible. But, each has a distinctive sound, which local residents can identify without understanding the message.

However, the most frequently heard sound is that of barking dogs. Dogs are plural because there is never a series of barks of one without another’s attempt to drown out the challenge of the first. Then typically every other dog in the immediate neighborhood lets the world know which dog they are cheering for. Since this is Mexico, there are many Chihuahuas. Size varies from small, to smaller, and smallest, with a bark pitch in inverse proportion. 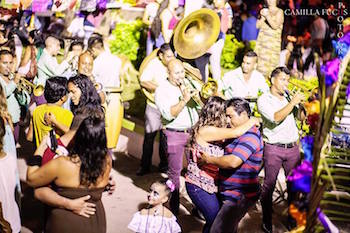 Sayulita is a true dog refuge where participative democracy definitely includes man’s best friend. Sayulitanimals organizes vet services to neuter and provide health services to Sayulita’s numerous residents not included in the census. Many people set out water and food to help maintain some of the town’s dogs, which have no permanent home. There is an active program to adopt these animals and many tourists respond by taking one or more back as pets to Canada or the US. The dog community responds by being docile and friendly, but not overly so. They appreciate petting and feeding, but they are never aggressive in search of either. They wander freely, in and out of restaurants, all of which are open to the sidewalks. However, they are still dogs and a barking chorus is a frequently heard sound burst. Most often, it is a small dog letting a larger dog know that he has equal rights. But, you never hear two dogs utter the aggressive growls of a physical battle. Well-treated dogs are responsible citizens.

Dictatorships show that people treated like dogs react angrily. Perhaps Sayulita’s gift to humanity is to show us that dogs well treated by humans will live in peace and harmony. Here we have a species with a severe handicap: They cannot communicate through speech. Yet, they show all of the human emotions. Thus, even humans with handicaps, such as sight impairment can still appreciate the world of sound, especially in Sayulita. 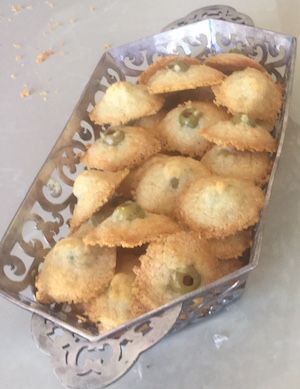 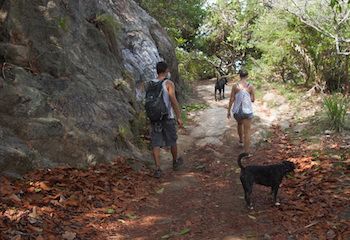