A Trip to the Marieta Islands with Mi Chaparrita 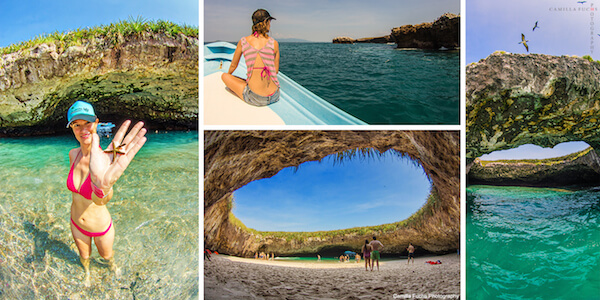 Sunday afternoon was one of those days where the sky was clear, the sun was shining, and the salt from the ocean water could be tasted in the air. The surfers were out in full force, taking advantage of the huge waves, while children and their families laughed and played in the water. It was 2:00 p.m. and my friend, Camilla Fuchs, and I sat in a panga just off the shore of the main beach in Sayulita. Our captain, Gabriel, and our tour guide, Javier, both with Mi Chaparrita, held on to the panga, waiting to take off between wave sets. After a few minutes, we took off towards the Marieta Islands, an amazing breeze blowing our hair and clothes.

The panga we were on accommodates up to eight people, but Camilla and I had the boat to ourselves. With cushioned bench seats and an overhead canopy, it was a comfortable and enjoyable 45-minute ride to our destination.

The Marieta Islands, which were formed by volcanic activity and are uninhabited, are absolutely breathtaking. I took in the beauty of the vegetation growing from the top of the islands, the beautiful rock formations and caves, and the endangered blue-footed boobies standing on the rocks and flying above. In the early 1900’s, these islands were used for military testing, and the unique rock formations, arches, and 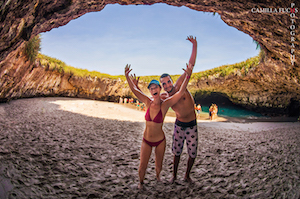 caves are a result of the large explosions and bombings from that time. This area is now labeled as a national park and is a protected area from fishing, and is known for its thriving marine life.

Though I’ve been to the Marieta Islands several times, this was the first time I had gone in a panga. I found being in a small boat to be exciting, particularly because it allowed us to get pretty close to the islands for a great view. One of my favorite sights of the day was what Javier called the “bufadora,” which was basically a blowhole. Gabriel navigated the panga close to it and when the water shot out, Camilla and I laughed as we got hit with the nice, refreshing water.

The Marieta Islands are known for its “hidden beach,” which can only be reached by swimming through a short tunnel of rock. Camilla, Javier, and I swam through with our life jackets on and then made our way to the beautiful sandy beach. Through the opening above, the sun was shining down, adding to the beauty that surrounded us.

I was excited to see a baby starfish in the water moving back and forth with the waves. I picked it up to get a closer look and then put it safely back in the water afterwards. 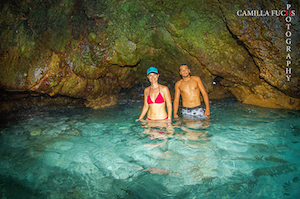 Javier was patient, allowing us plenty of time at the beach and was a good sport when we asked him to pose for some photos. When we were ready to go, we headed back to the panga to go to a nearby spot to snorkel. We stopped at an area not far from the shore of two small beaches. The water was absolutely perfect for snorkeling, the temperature not at all cold, but at the same time, not too warm.

At first I could see fish darting back and forth around the coral underneath me, but as I got closer to the shore and the beach, the water became murky from the large waves. At one point, I saw some sort of large creature about five feet from me, which startled me until I realized it was Camilla diving down to get a better look at the fish.

We swam to the shore to explore the secluded beaches, where small snails stuck to the rock formations and crabs scattered about on them. When we looked out at the ocean, the only boat that could be seen was our panga. It was amazing to be the only ones on the beach, surrounded by such magnificent beauty, and aside from our boat, only see the ocean stretched out before our eyes.

On the boat ride back to Sayulita, we saw a flying fish jump out of the ocean and glide above the water. Generally I see them jump up and almost immediately disappear again, but this one glided for a good ten seconds. Camilla and I joked that magic happens when we hang out together, but really, I think there’s a lot of magic that happens in Sayulita. 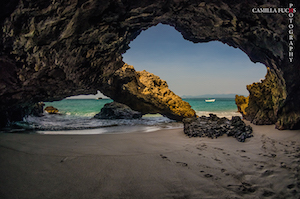 If you’d like to experience this tour to the Marieta Islands for yourself or one of this company’s other tours, contact Mi Chaparrita. 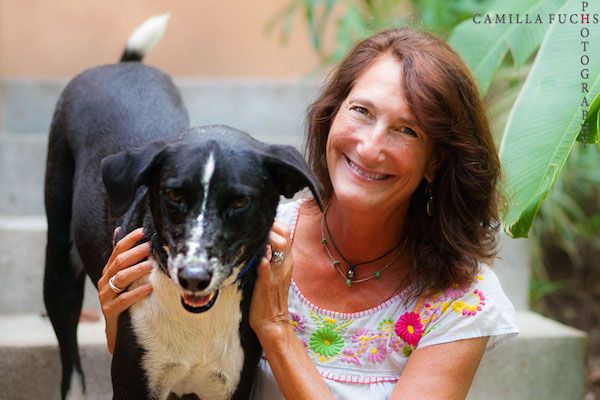 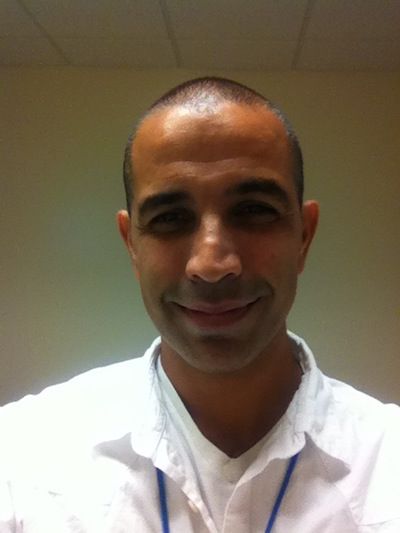