New on the Scene in Sayulita: Subway Sandwich Franchise 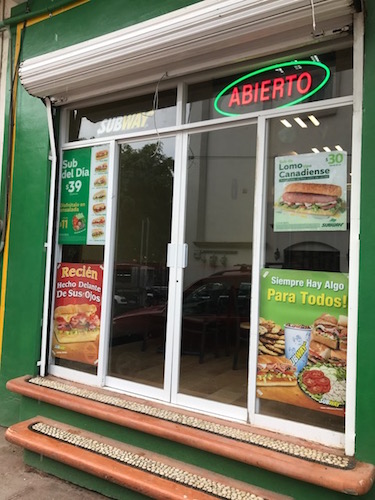 A new Subway Sandwich franchise has just opened in Sayulita at Jose Mariscal #35, amidst a fair amount of controversy. In a place where chain restaurants and franchises are virtually unknown, Subway's arrival has sparked a conversation about having more chains come to town.

One group is squarely in opposition to the idea of any formula retail in the pueblo. Luciana Valente, a personal trainer and owner of El Club, took to the internet to voice her concerns. It quickly became clear that she wasn't alone. Her petition on Change.org, entitled "Mantengamos a Sayulita sin cadenas extranjeras! Dile no a Subway." garnered almost 1,500 signatures. The signers were a mix of locals, part-time residents, and tourists, from countries including the US, Australia, Canada and Chile.

Some signers cited a distaste for Subway specifically, but more often they expressed an overall passion for keeping Sayulita unique, and for supporting small, local businesses. The sentiment on the Change.org petition, and on many related Facebook discussions, has been broader than "Subway, Keep Out".  For many people the aim is to keep chains out, period.

There's plenty of precedent for anti-chain movements. Other towns and cities big and small, whose residents take pride in maintaining a certain level of "funk", have expressed similar misgivings about franchises. Some, like San Francisco, have experimented with legislation that makes it more difficult - sometimes impossible - for large companies to open locations in certain neighborhoods. Other efforts, like the bumper-sticker-famous "Keep Boulder Weird", are more grassroots and focused on voting with your pocketbook to help independently owned businesses flourish. And, by extension, to ensure that corporations don't.

Online there's a lot of alarm and dismay to be found regarding Subway's opening, along with anxiety about local restaurants suffering from the competition. However, at least some established small business owners seem unworried that Subway will affect them, at least not directly.

Antonio, owner of Burrito Revolution, doesn't believe Subway will draw his long-time Sayulita customers away. And he defends anyone's right to create a new business in town. "The authority they have to open a restaurant here - it's legitimate." He points out that unless the town creates new legislation and rules about what types of new businesses can be added, anyone can operate what they like. There have, of course, been a multitude of new restaurants and shops springing up over the past several years in general. Where there once were three, perhaps now twenty. And, Antonio says, "Who am I to say who can be here and who can't?"

Paul Gibbs, co-owner of Orangy Smoothies next door to Subway, expressed a somewhat similar live-and-let-live philosophy. "Some people have said it will hurt our business, some have said it will help our business. I’m not going to get negative about it. If you don’t like it, don’t eat there.” Fans of small spots like Orangy point out that money from these places remains in Sayulita. Paul, and his wife and co-owner, Danny purchase virtually all of their fresh produce from fruterias right here in town. Providing their customers with healthy, safe, and natural food is very important to them, and as owners of a small business, they have total autonomy over their mission and what they create and serve.

Some fear that the same might not be possible for a franchise, which has at least some responsibility to the umbrella corporation. Subway is the largest restaurant chain in the world, with 21,000 franchises in over 100 countries. Meaning you can get essentially the same experience eating in Guadalajara or Geneva. And, for many people, that's the rub.

Sayulita is one of those vibrant corners of the globe that inspires a lot of passion about the things that make it irreplaceable and unique. What makes Sayulita, well.... Sayulita? A beautiful and reliable surf break, lush jungle, and fantastic fishing? Absolutely. And without a doubt, the pueblo's colorful, one-of-a-kind shops and restaurants are a huge part of the fabric of Sayulita's vibe and ethos. Town is full of dozens of storefronts bursting with gorgeous art and food, much of which can't be had anywhere else in the world. Subway's arrival could set a precedent for other corporations who want to come to Sayulita, and most agree that a Sayulita full of nothing except corporate storefronts would be a sad thing. More difficult to agree on is: How many chains is too many?

"Local" is spelled the same in Spanish as in English; it's a word that gets a lot of use in Sayulita. It's something of a shorthand; an appreciation for and celebration of what makes the pueblo special.  Along those lines, a lot of new "Consume Local" signs have appeared in town, encouraging people to buy from independent businesses. 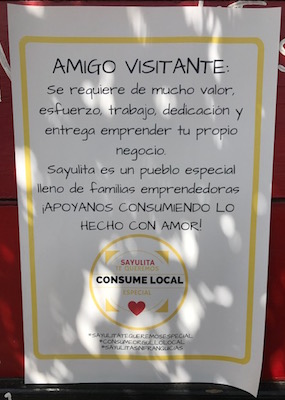 Paulina Fernandez and Alejandro Oliveras are the owners of the new Subway on Jose Mariscal, as well as the location on Punta Mita Highway. Paulina says that, to them, their restaurants are local businesses. Subway the company doesn't actually own any of the individual Subway restaurants. All 21,000 locations are owned by independent operators. In this case, owned by a family who's been coming to Sayulita for over 30 years, and who lives here full time. Previously, the retail space was occupied by Paulina's father, an architect.

Speaking to Paulina and her brother, Octavio, it's clear that they share a passion for Sayulita, and Paulina's pride of ownership is evident. "We've saved and waited for a long time to be able to make this happen. We really love Subway and it's very important to us that everything in the restaurant will be clean and fresh." Other things are important to them, too. She says that, although there's an option to purchase all ingredients directly from Subway, they do purchase fresh produce in here town. Their meat comes from Bachoco, a Mexican company, and the construction for the restaurant was done by Mexicans. Like many business owners in Sayulita, they're trying to minimize the use of straws (customers can still get them, but they have to ask). And they're disappointed to see the new signs at other restaurants, many of which they have frequented, that may be intended to steer people away from their business.

Her hope is that people will try them out and will find them to be delicious, and a good value. Indeed, the issue of value and cost is particularly important at the moment. Sayulita's increasing popularity is pushing up rents and also the price of eating out. Several people have pointed out that dining in Sayulita is much less affordable than it used to be, and that Subway offers some cheaper options for both tourists and locals. However, while rising costs are indeed a serious issue, the idea that Subway is cheaper might be more perception than reality. The least expensive 15 cm sandwich at Subway is $45; less than most lunches in town. But a 30 cm sub at Subway is $80-$100 pesos, the same price as a sandwich at Ruben's, which is a much fairer comparison as far as meal size.

With rumors of other potential franchise openings - notably Starbucks - in the air, this is sure to be a discussion that will continue in Sayulita for many years to come. 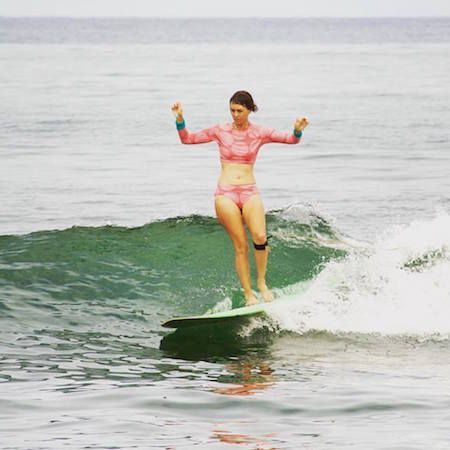