Even at the best restaurants in Sayulita, ceviche never quite tastes like it does when it's prepared with your own catch; like a citrusy burst of adventure and victory. There's only one way to get it, and there are no shortcuts.

The notes for this recipe begin with: Cooking Time - 10 minutes. Prep Time - 1 Day with Regis at Fishing Sayulita. 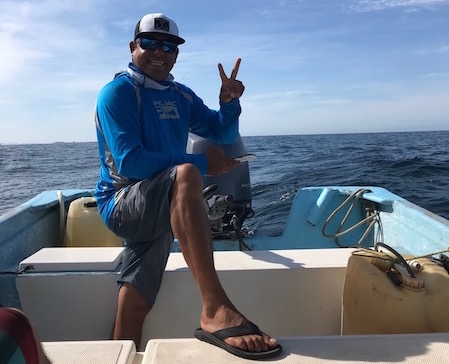 A day on the ocean is an elixir for an over-planned life. On the water there are no roads, no script, no predictability. Nothing ever happens quite the same way twice. Which is helpful to keep in mind during the inevitable lulls that occur on a fishing boat, the water slapping the hard side of the hull, everyone waiting, watching. Each wave is different than the last, each blue-green swell brings the potential for a strike.

Regis Cadena of Fishing Sayulita doesn't mind the slow moments. "I'm loaded with patience," he tells us. It's a golden gift for a fisherman. "The more you worry about finding a fish, the harder it is to get one. The fish will come."

At 9AM, an hour into our trip, they haven't come yet. Perhaps they're chasing warmer currents, as Regis suggests, or they're still hungover from the weekend, or they had a huge breakfast, thanks, and couldn't eat another bite at the moment. Already this morning we've watched miles of Nayarit coastline slide by, a fascinating show set to the background buzz of the outboard motor. The map of the area that's in my head comes alive in living color as we point out landmarks - the long slender pier marking the El Faro surf break, the creamy, posh white umbrellas of a Four Seasons beach club stacked on the hill above Punta Negra, the jagged rocks of the jetty sheltering the boat masts of Punta de Mita harbor, and the emerald green profile of Monkey Mountain which, when viewed from the ocean, shows a baby monkey's face turned toward the sun. The five of us exclaim and point and argue about which spot is which, while Regis and deckhand Tito Pepe, who 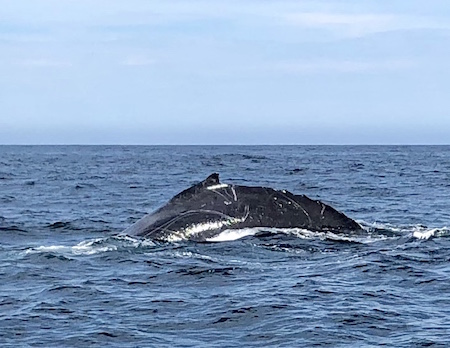 know not only the land but the distance to the invisible sea floor below us by heart, let us go at it and settle debates only when asked.

After first purchasing a bucketful of palm-sized, silvery live bait fish (250 pesos) from a small panga floating near the harbor, Regis turns the bow toward the Marietas Islands, heading for a nearby fishing spot. It isn't long before the shout of "Whale!" We all scramble to the front of the boat and hold our breaths, scanning the horizon.

There, out by that sailboat, near the islands!

Boom! An impossibly huge, even at a distance, humpback whale breaches the water, turns, and falls with a white splash. The second and third whales are only moments behind, breaching almost completely out of the water again and again, as if showing off for their distant audience, spinning and landing and sending enormous plumes of water into the air, the curve of their fins and the channels on their long bellies visible in the bright sun.

As we slather on sunscreen and reach for trail mix and Gatorade, Regis pilots us onto a set of rolling waves that lift the boat so high that it's a surprise to see that we're more than a hundred yards from shore. There's a shallow reef here, he explains, as the waves start to break right next to us. To the uninitiated, it appears that the break water might crash down on the bow and flood us or push the boat into a backwards flip, but Regis's expert hands keep us safe on the shoulder just outside the wave crests, the sweet spot for finding our quarry. 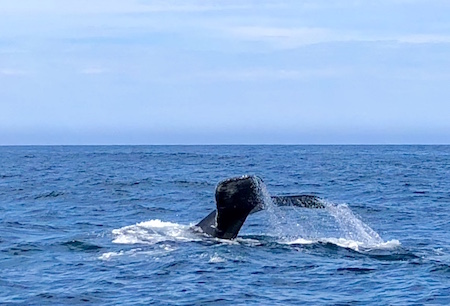 We have three baited lines in the water and a radio that's squawking report after report from other boats, all with the same news: No fish. We spend an hour or two passing around a rod and reel, working to perfect the perfect flick of an overhead cast. It's gone quiet in the boat and our attention is beginning to drift when a pair of slick, bat-like rays punches through the surface almost within arm's length, flapping their triangular fins once or twice before flopping into the water again. Tito Pepe tells us the Spanish word for rays is mantas, wonderfully easy to remember. We recommit to watching with vigilance, reminded that action is fleeting and arrives at unexpected times.

From my post in the bow, I don't even hear the whizzing sound of the reel when it finally happens, just a general commotion on the back of the boat. When I turn, everyone is scrambling and shouting. The top mounted fishing pole has made it's way out of its holding slip and into the hands of my friend Robyn, and it's dragging her toward the water.

Tio Pepe runs back to shove a rubber cushion onto the end of the rod handle. Robyn braces it against her hip, the tip of the pole arching until it almost touches the water. Far behind the boat, a neon green and yellow flash appears as the fish jumps, furious to escape, but the hook is set. We hop around, standing on seats for a better view, yelling encouragement as Robyn fights, pulled first to one side of the boat and then the other, Regis steering and ducking under the line.

For a terrifying moment it seems that the rod might fly into the sea, taking both fish and tackle, until Robyn throws her body weight back and regains control, pulling the fish closer and closer until we can all spot it clearly as it swerves back and forth, putting up a strong fight. 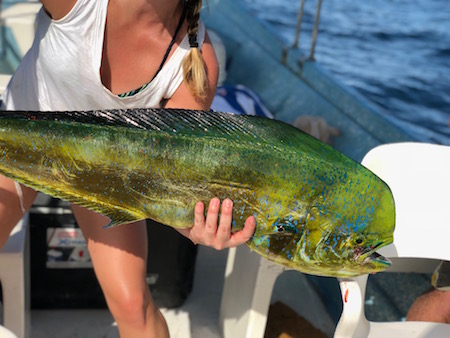 In the end though, Robyn prevails, dragging it close enough for Tio Pepe's sharp-pointed gaff to hook it and drag it over the gunnel. We jump up onto the seats, still yelling with glee, as the fifteen pound mahi thunks and thrashes against the floor. When embarking that morning we'd rinsed our sandy feet carefully, telling Regis we would try to keep a clean boat.

Regis declares this to be a male dorado. Dorado travel in pairs, he says, and when you catch the female first, the male hangs around searching for her, so you can often catch him as well. Snagging the male doesn't work the same way. In his absence the female will shrug her fins and swim away; one of nature's amusing little anecdotes. Still, our rush of adrenaline and pride has imbued us with confidence and hope as we re-bait and recast. Despite the fact that we brought bananas on board, which Regis says are considered terrible luck in the fishing world (though he's the rare fisherman who's devoid of superstition), we high five and congratulate ourselves like crazy on being one of the few lucky crews of the day. Well-earned Coronas are popped open.

Our confidence turns out to be misplaced, where fish is concerned, though the ocean has something even better in store for us. After another hour of lazy and contented casting and chatting, secure in the knowledge of a catch chilling in the cooler, tall white plumes of spray suddenly appear, much closer than before; two or three whales, at least. 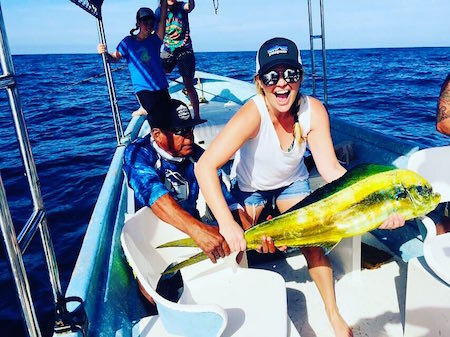 Pulling in the lines, we zoom toward them, bouncing and skittering along the waves. Approaching the place where they had disappeared from view, Regis slows to a crawl and then stops, shutting the motor down for the first time. The ocean is calm here, and without the motor, quiet descends, only a soft whistling noise cutting through the breeze. There is a thrill of a moment when it seems the whistling might be whale song, audible even above the surface, but it is only the wind blowing through the fishing rods.

Knowing that whales can stay submerged for 15 minutes or longer, there is a chance we won't see them again. There's also a chance they'll surface underneath the boat.

After a few minutes of squinting at every ripple, straining our ears for any small splash, they appear, perhaps 200 feet away. Languidly heading south, they show us the stormy, shiny grey of their backs, and the slow, graceful flick of two spotted tails.

It's a surreal moment at the end of our voyage. We feel grateful to the sea for another day of unexpected, unplanned, unrehearsed moments. And... for dinner. 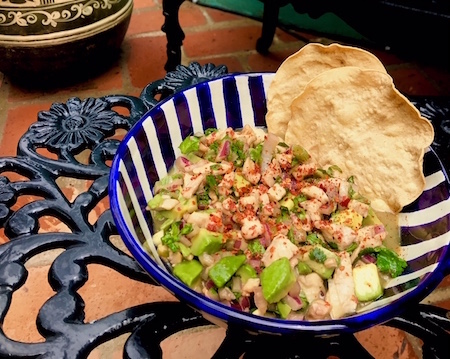 Combine all vegetables with lime juice and mix thoroughly. Add salt to taste. 10 minutes before serving, gently stir fish into vegetable mixture. Add more lime juice if necessary to thoroughly coat fish. Let stand for approximately 10-12 minutes to allow fish to "cook" in the citrus juice. Serve cold on tostadas with hot sauce or chili flakes, and a drizzle of olive oil, if desired. This is a great "hang loose" beach recipe, as the ratios can be adjusted however you like. With fish this fresh, just get some lime on it and you're golden! 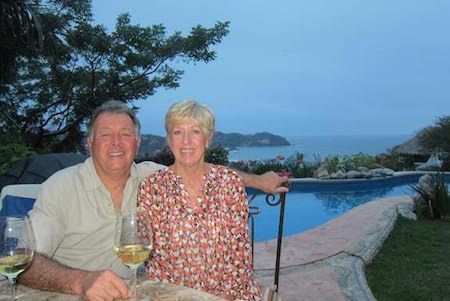 < Previous Article Discovering Sayulita and the Street Food of Sayuli...
Next Article > Nicoella Event Design & DJing: An Interview with N... 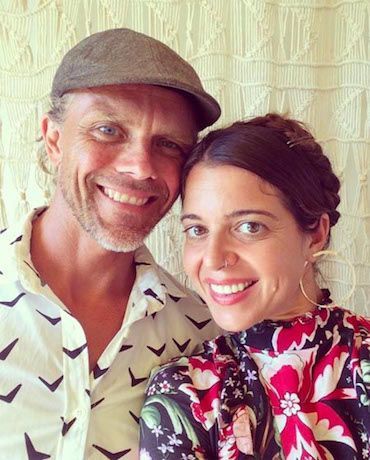